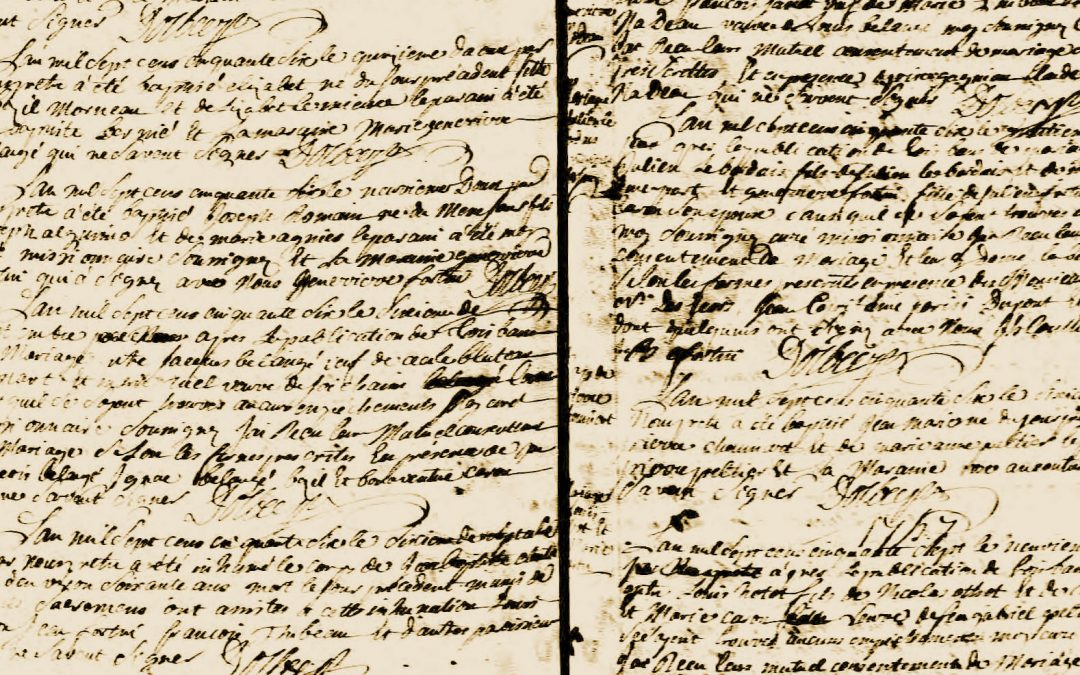 I was hired by a son who wanted to present his mother with a birthday gift of family history by searching out the origins of the Autotte family that was believed to be from France.

My Goal was to find the town/region they emigrated from and where they landed in the New World. Also the names of the family members that made that journey. I delivered a one page summary of the facts I learned along with any reference documents. In addition I filled out the family tree on Ancestry.com as far as I could given the budget constraints. Here is the summary I submitted along with a family coat of arms I discovered.

The Autotte Family, originally spelled Hotot or Hottot, were of Norman descent. who traveled to L’Islet, Quebec, Canada from their homeland of St Leonard, Honfleur, Normandie, France on or around 1757 according to a record listed in the book U.S. and Canada, Passenger and Immigration Lists Index, 1500s-1900s. Louis Audet Hottot, son of Nicolas Hottot and Catherine Parisis, was part of a first generation of Normans that journeyed to the New World during what is known as the Norman Conquest of Canada. Louis was born in Normandie on April 16th, 1730 and on April 17, 1778 passed away in L’Islet, Quebec, Canada. Records show he and his wife, Marie-Elisabeth Caron, had at least 8 children.

Claude Joseph, according to his 1871 Census of Canada information, aged 86 and healthy, lived in Yamaska, Quebec, Canada at the time and was a catholic who was living with his wife Marguerite Martin and was renting rooms to his 2 sons, Hubert (age 31) and George (age 34). He was able to read and write in French. His last name was now spelled Autotte, which is the present day spelling of the family’s name as of 2020. This is changed from his baptism record of 1871 which had the spelling of Hotot. I can only speculate that this change was to make it easier for English speaking Canadiens to more easily pronounce the name correctly.

Joseph Autotte (b. 8 December 1818, Yamaska, Quebec, Canada – d. about 1901), a son of Claude and Marguerite, married Angele Joyal on September 27, 1841 in St. Francois du Lac, Quebec. He lived his life with his family in Yamaska, Quebec Canada as a farmer, or as listed on the census, a cultivateur. His lived for a while as a widower in St. Michel Village in Yamaska at the age of 71. He was buried at age 81 in Yamaska.

From that family was born George Autotte (b. 2 February 1854, St. David Yamaska Canada – d. 19 April 1937, West Warwick, Kent, Rhode Island, USA) who at the age of 43 immigrated to West Warwick, Rhode Island in America in the year 1897 with his wife Edesse Parenteau and their children. The 1930 US Census lists him as age 76, French speaking. He was working in a blacksmith shop as a smith. Was not a US citizen. He was a home owner and resided with his wife Edesse who was 72 at the time along with 2 daughters Arsidas, age 39, and Albertina age 40, and her husband Armond Boulanger age 43. He died and was buried with his wife and 2 daughters at Notre Dame Cemetery in West Warwick, Rhode Island.

In additon to the 2 daughters, George and Edesse had a son, Amherst Autotte (b. 24 June 1882, St. Michel Yamaska, Canada – d. 28 October 1958, Woonsocket, Rhode Island, USA) Amherst came to America with his family in 1897 and became a naturalized citizen of the United States of America on September 16, 1916 in Rhode Island. He was registered in the drafts for both world wars. His native tongue was English and could read and write. He chose to be a butcher as his occupation and worked as one at a market when he was 28. Amherst married Marie Anne Charboneau and had several children including Adrian Autotte.